The Silent Girl with a Bun

Note from Serra: Just a Christmas gift. If you guys want more, donate to my PayPal, $5 or more

The new, modern theaters could show popular 3D movies. Audiences could only view them properly while wearing special glasses, or else the screen would look like a large swathe of blurry graffiti.

Though 3D movies were pretty amazing, I still missed the old movie nights in my hometown.

When I was young and lived at my grandparents’ house, the town would hire a person every weekend to set up a projector at my school’s soccer field. Though they mostly screened old war films or popular films from last year, they would occasionally screen a few foreign classics.

The girl in front of me gave me an indescribable feeling. If she was really an otaku to this degree, I felt very sorry for her.

Has she lost all sense of language?

I glanced at the girl a bit annoyedly as I typed these words into my phone and sent her a message.

The girl emotionlessly typed on her phone’s keyboard. Her fingers’ speed was extremely fast, and the sentence appeared on my screen in just a few moments.

I stared at the girl by Guo Tong’s side in extreme awkwardness. She was even more skinnier than Jiang Muqing, and her height was almost a foot shorter than the standard height.

Her figure was even more saddening. There wasn’t much to comment on other than her skinniness. Where there should have been a rise was a flat wasteland.

Though her facial features weren’t very special, it gave off a sense of quiet intelligence.

Her long hair was simply tied back in a bun. She wore a clean, white shirt and dark shorts…

“It’s not that she doesn’t know how to, she just doesn’t really like to speak with strangers because it gives her anxiety. Texting makes her much more comfortable.” Guo Tong chuckled as he explained.

The reason why girls of planet Earth were so peculiar, like Jiang Muqing and Jian Yu, was beyond me.

Guo Tong waved at me and Jian Yu.

Since the theater had just recently opened, all the tickets were discounted. If we had ordered online, it would have been even cheaper.

Guo Tong was as cunning as ever to jump on this deal and save a load of money. But now that he’s asked me to be a third-wheel, he’ll have to treat me to lunch.

“Do you want any drinks or snacks?”

“Some hot green tea and nothing else, please.”

A voice that sounded like a flat line sounded behind me.

Did she just speak? I glanced back at the emotionless girl staring off into the distance. Was I halluncinating?

Guo Tong gave us an OK gesture and went to wait in line.

Jian Yu and I sat on a bench waiting for him.

Should I say something? I peeked at the girl through the corner of my eyes.

“Um…” I wanted to start a conversation.

A new message popped up on my phone.

I unlocked my phone confusedly. A new text had popped up.

“Although we’ve just met, I want to ask you. Are you a good person or a bad one?” The text read.

What did this mean?

I didn’t get she meant.

“If you’re truly a pleasant person, why would you have an adversary?” The girl continued to type.

“An adversary?! But nobody’s ever made me an enemy before.”

Is your head okay? I’m not some model citizen, but at least I abide the law!

“Your adversary is following you. Behind you, the second pillar from the end.”

The girl typed with an empty expression.

I quickly turned my head. To my surprise, a shadowed figure immediately shrunk back behind the pillar, just as the girl had described.

Who would follow me without a reason? I didn’t have a buttload of debt or commit any heinous crime. I didn’t possess national secrets, nor was the assassination target of foreign countries.

I waited until the person was completely behind the pillar and crouched down, crawling out of their sight. I jogged all the way around the theater and arrived behind them.

The person was wearing a black jacket and wore a big hat. Their hands were stuck in their jeans, and they looked extremely suspicious.

The person didn’t seem to notice me. When they stuck their head out and saw that I was gone, their target was already about to pounce.

I charged forward in a bear hug and completely immobilized my stalker.

A girl’s scream? She was clearly scared and surprised by my assault.

I quickly turned her around.

“Jiang Muqing?! What are you doing here?”

I saw her angry face.

She wasn’t willing to back down even after being caught. 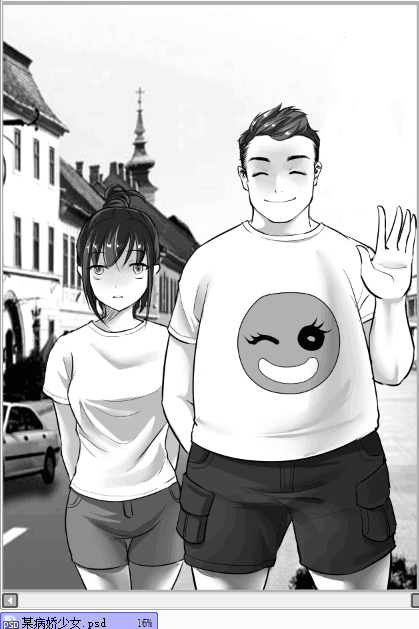